The runC Vulnerability - A Deep Dive on Protecting Yourself

A vulnerability in runC, which allows an attacker to gain host-level code execution by breaking out of a running container, was discovered and reported by Adam Iwaniuk and Borys Poplawski in early January and published as CVE-2019-5736 on 11 February 2019. This vulnerability is highly significant in that it:

The runC container escape vulnerability occurs due to file descriptor mishandling. Upon creation of a new container or upon exec into an existing container by an authorized host user, this vulnerability ultimately allows attackers to overwrite the host’s runC binary with a malicious binary of their choosing. Because runC is generally invoked from the host within the context of the root user, the malicious binary would have root access to the host. This binary then could be used to run any arbitrary code, including code to initiate a reverse shell.

Anyone who maintains container infrastructure should immediately upgrade to the latest version of runC on all container hosts. All major container platform providers have published specific guidance for their users (e.g., EKS, AKS, GKE, and Red Hat).

What are the technical details behind this vulnerability?

The runC container escape vulnerability takes advantage of file descriptor mishandling, as well as a unique aspect of the Linux /proc filesystem, to ultimately overwrite the host runC binary with a malicious binary.

At any given time, the path /proc/self/exe points to the path of the process that is currently scheduled in the kernel. For example:

The role of file descriptor mishandling

This situation gives an attacker the opportunity to modify one of the runC libraries on the container filesystem with malicious code. As a result of file descriptor mishandling in runC (i.e., the ability to construct a file descriptor path for the host runC binary which can be opened for writing, which should not be possible), this malicious library can be designed to overwrite the host runC binary with arbitrary code. That code will be executed on the host within whatever user context the original runC binary was run (which is usually root).

Iwaniuk and Poplawski posted an excellent write-up on their research leading up to the discovery of this vulnerability and proof-of-concept code from runC maintainer Aleksa Sarai is now publicly available.

How exactly can this vulnerability be exploited?

The runC container escape vulnerability applies to any unpatched system with [default Docker security settings](https://d3oypxn00j2a10.cloudfront.net/assets/img/Docker Security/WP_Intro_to_container_security_03.20.2015.pdf) and a container running with UID 0.

An attacker can deliver an exploit for this vulnerability in one of two ways:

In either of these cases, once the container is prepped with the required malicious library and a binary pointing to /proc/self/exe, an authorized host user must either pull and run the malicious image (case 1) or exec into the container and use the relevant binary (case 2).

To exploit this vulnerability, an attacker must decide on a delivery mechanism and then perform the following actions in the target container/image:

When an authorized host user launches a container from a malicious image or execs into a compromised container and uses the relevant binary, the exploit will fire and perform the following steps:

How was it fixed?

The fix implemented to correct this vulnerability creates an in-memory file descriptor in the container, copies the host runC binary to that file descriptor, then re-executes runC. Under these conditions, if an attacker overwrites the binary to which /proc/self/exe points, that binary will live in memory in the container and the attacker will not be able to damage the host.

This fix does increase memory usage in the container. For larger applications, this increase will most likely go unnoticed, but containers designed to run with low memory limits (ranging around 16MB) may require additional memory allocation.

What should I do?

As mentioned earlier, you should immediately upgrade to the latest version of runC on your container hosts and see guidance from your provider if you’re using a managed container service.

If you cannot patch, mitigate your exposure

If you are unable to upgrade to the newest version of runC, you can take multiple steps to mitigate your exposure to this vulnerability.

This measure may help to reduce the risk of downloading an image that has been tainted with malicious code by an attacker.

The StackRox Kubernetes Security Platform ships with a default policy to help you restrict the registries from which your applications are allowed to pull images. 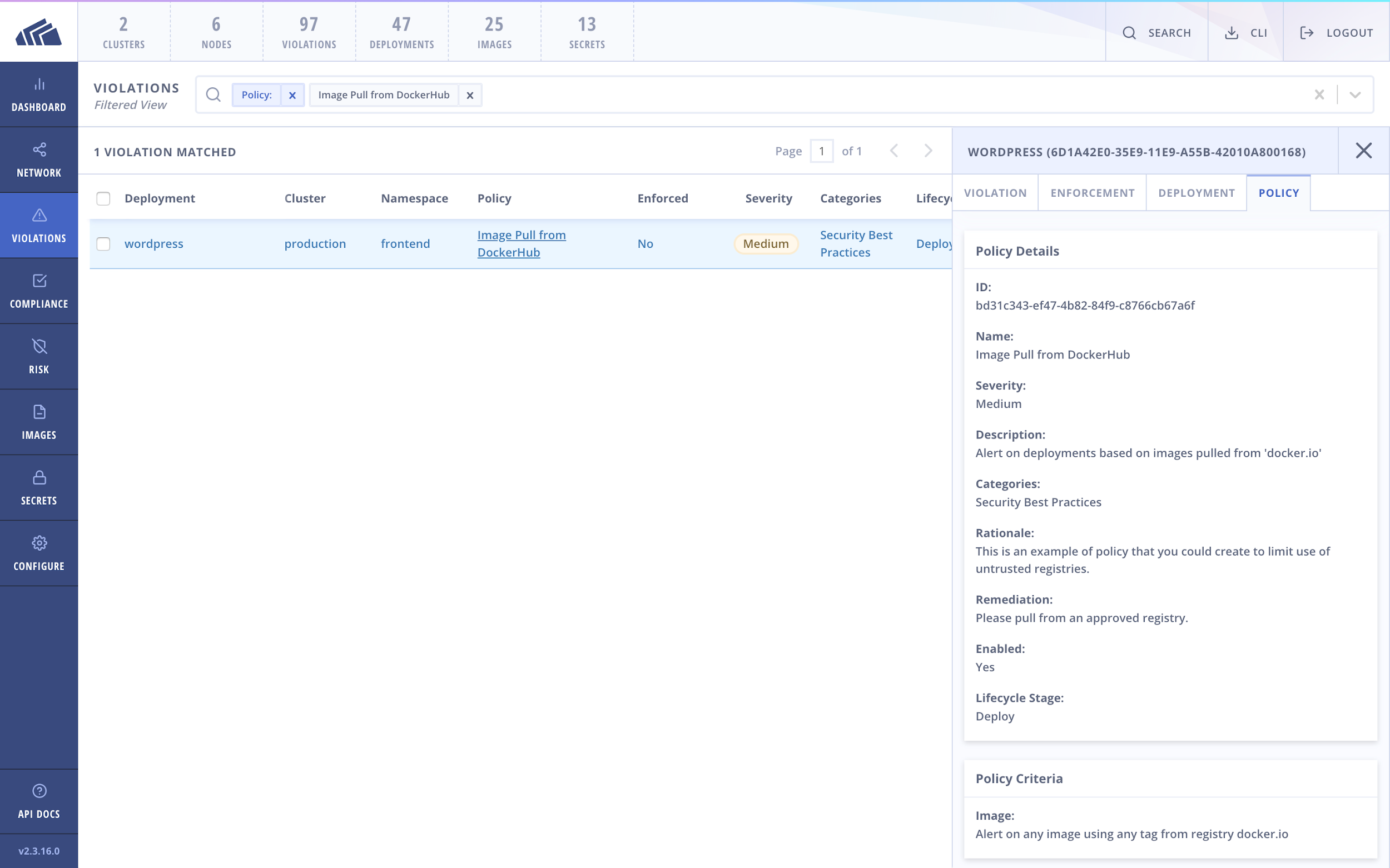 SELinux is not enabled by default, but it will mitigate this vulnerability by preventing container processes from overwriting the host runC binary.

Enabling SELinux is a CIS Docker Benchmark recommendation. StackRox offers push-button evaluation of adherence to industry and regulatory compliance standards, including the CIS Docker Benchmark. With a single scan, StackRox can provide visibility into which hosts across your entire container infrastructure have SELinux security options set and which do not. 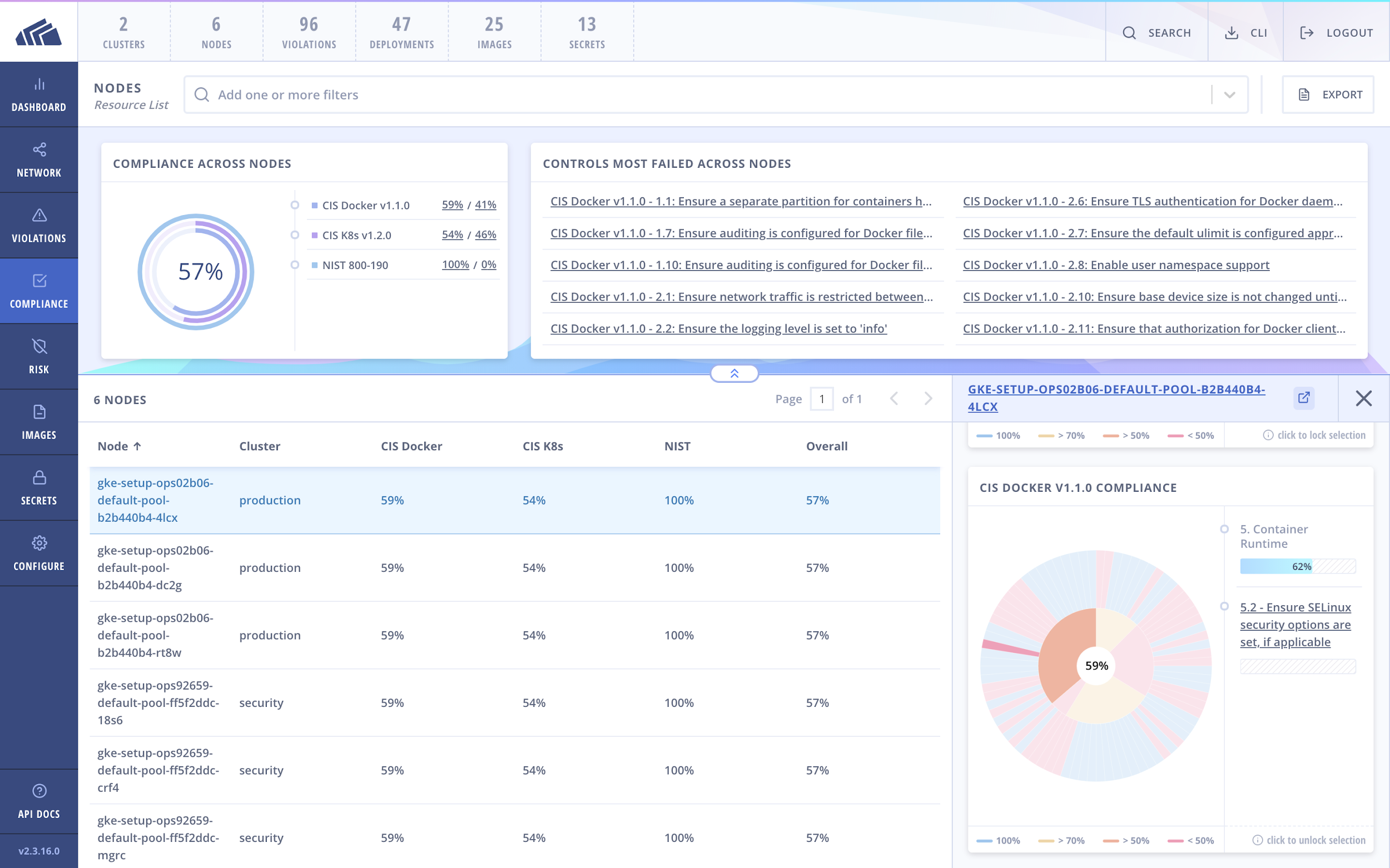 Do not run containers with UID 0

Unless you specify a lower-privileged user at the time of container creation, Docker containers run with UID 0 by default. Ensuring that you are not running containers as root will prevent the container user from being able to overwrite the runC binary on the host.

StackRox ships with a default policy that will alert on any deployments with containers running with UID 0. 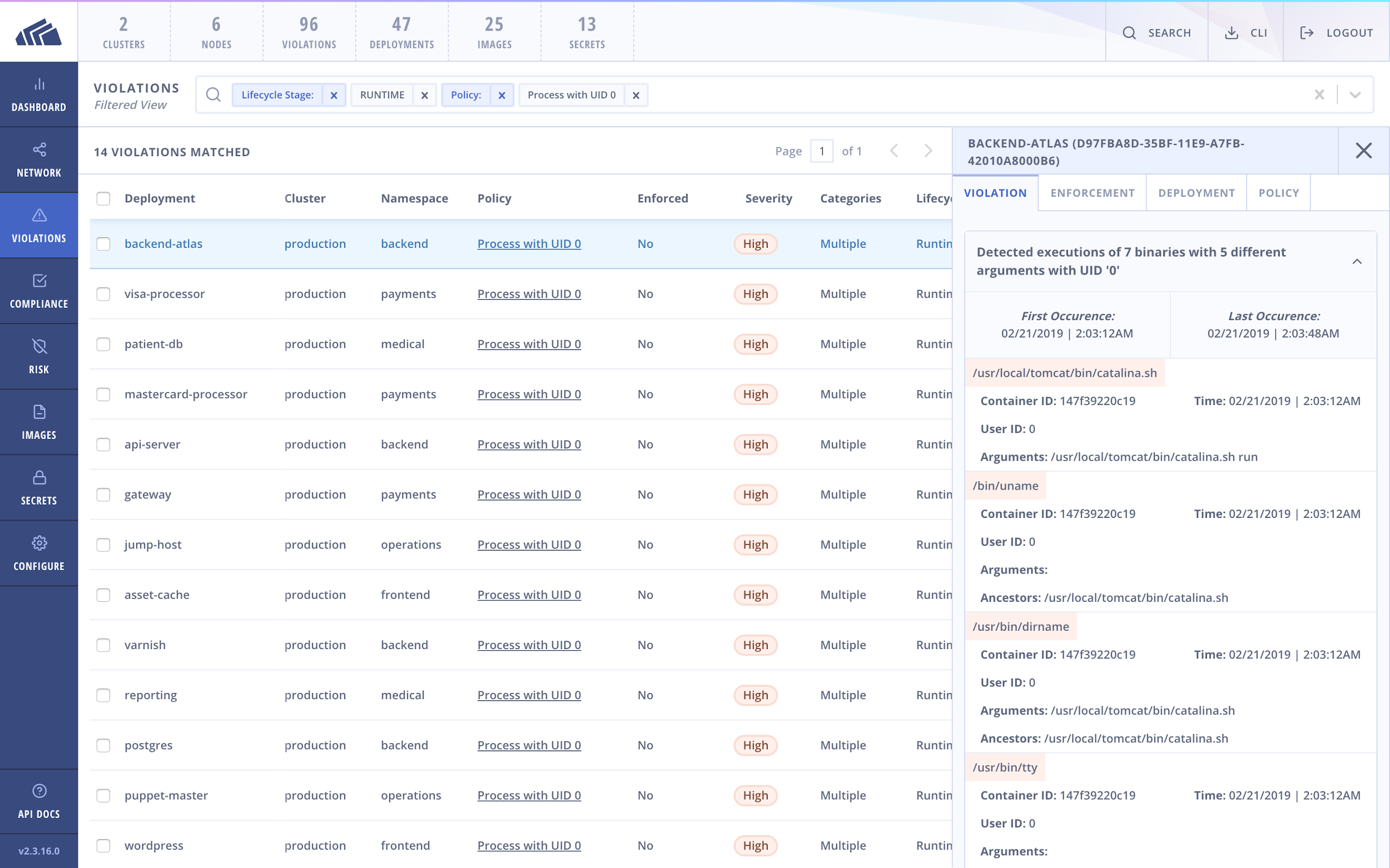 If you cannot mitigate your exposure, detect exploitation attempts

In the case of delivery mechanism via exploitation of an already running container, an attacker intending to leverage the runC container escape vulnerability for privilege escalation will need to incorporate runC libraries into the container to carry out the exploit. One way to accomplish this step is to simply install the runC binary in the container itself (Aleksa Sarai leveraged this method in his proof of concept).

StackRox ships with a default policy that will identify installation of new packages, including packages such as runC. 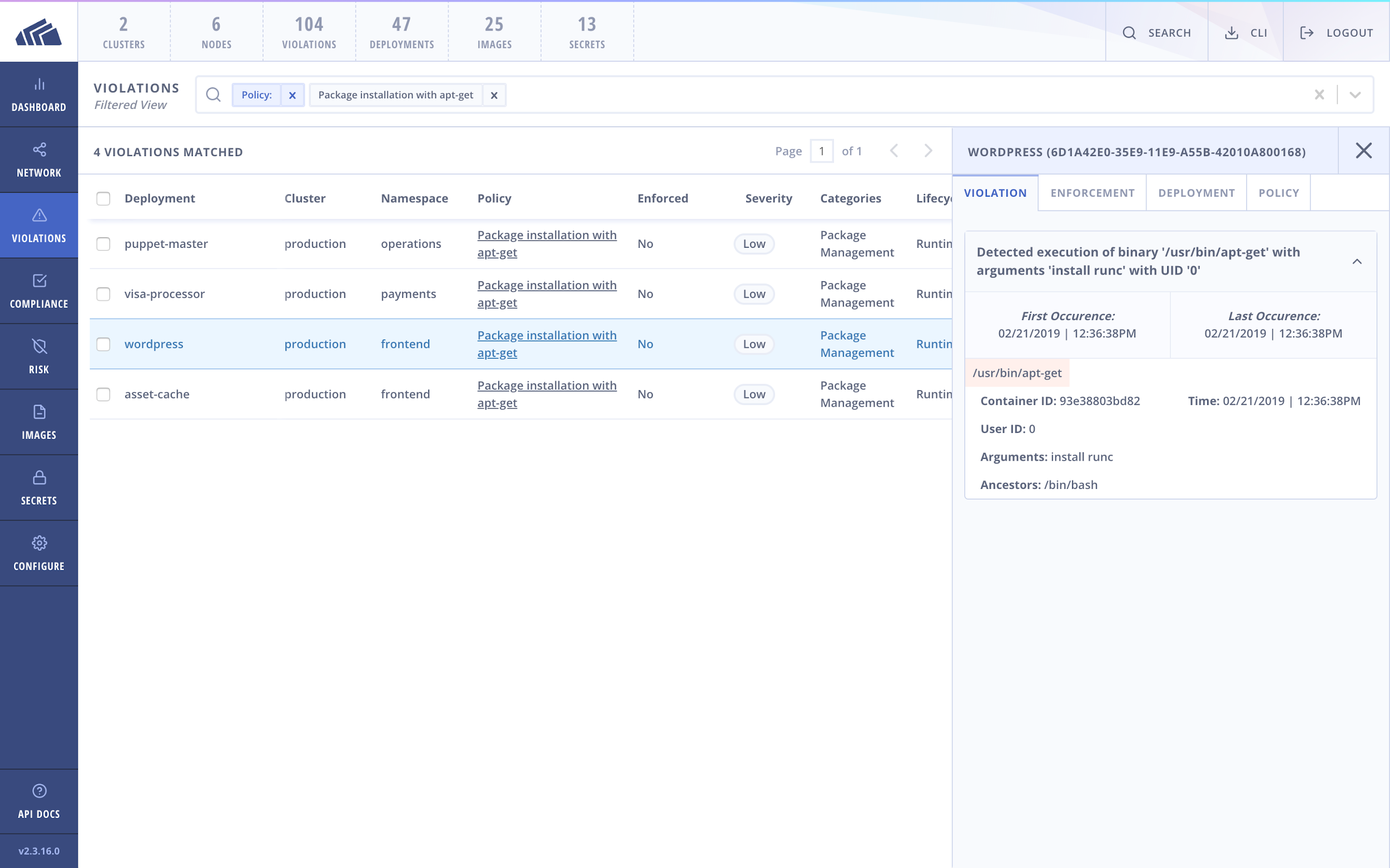 In the case of delivery mechanism via exploitation of an already running container, an attacker intending to leverage the runC container escape vulnerability for privilege escalation will also need to modify a binary to point to /proc/self/exe. The act of modifying this binary may be detected by either file or process activity on the host, depending on how the attacker chooses to perform the modification.

StackRox ships with a default policy that provides visibility into file modifications made in a manner similar to the following method (also used in Sarai’s proof of concept). 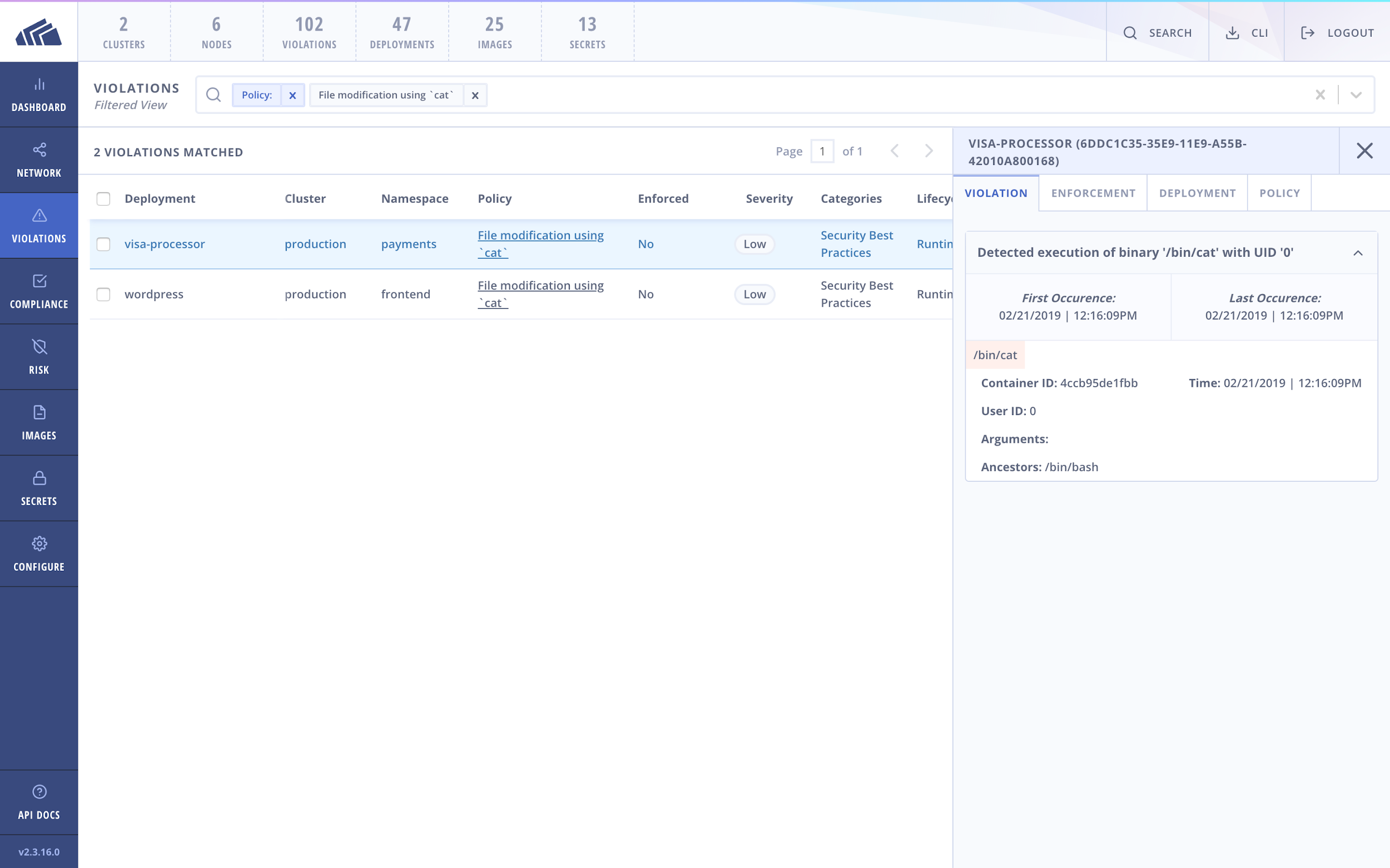 Detect reference to /proc/self/exe from within a container

In the case of either delivery mechanism, /proc/self/exe will be used to reference to the host runC binary. This type of activity by /proc/self/exe is rarely legitimate and easily detected.

StackRox ships with the capability to identify execution of /proc/self/exe. 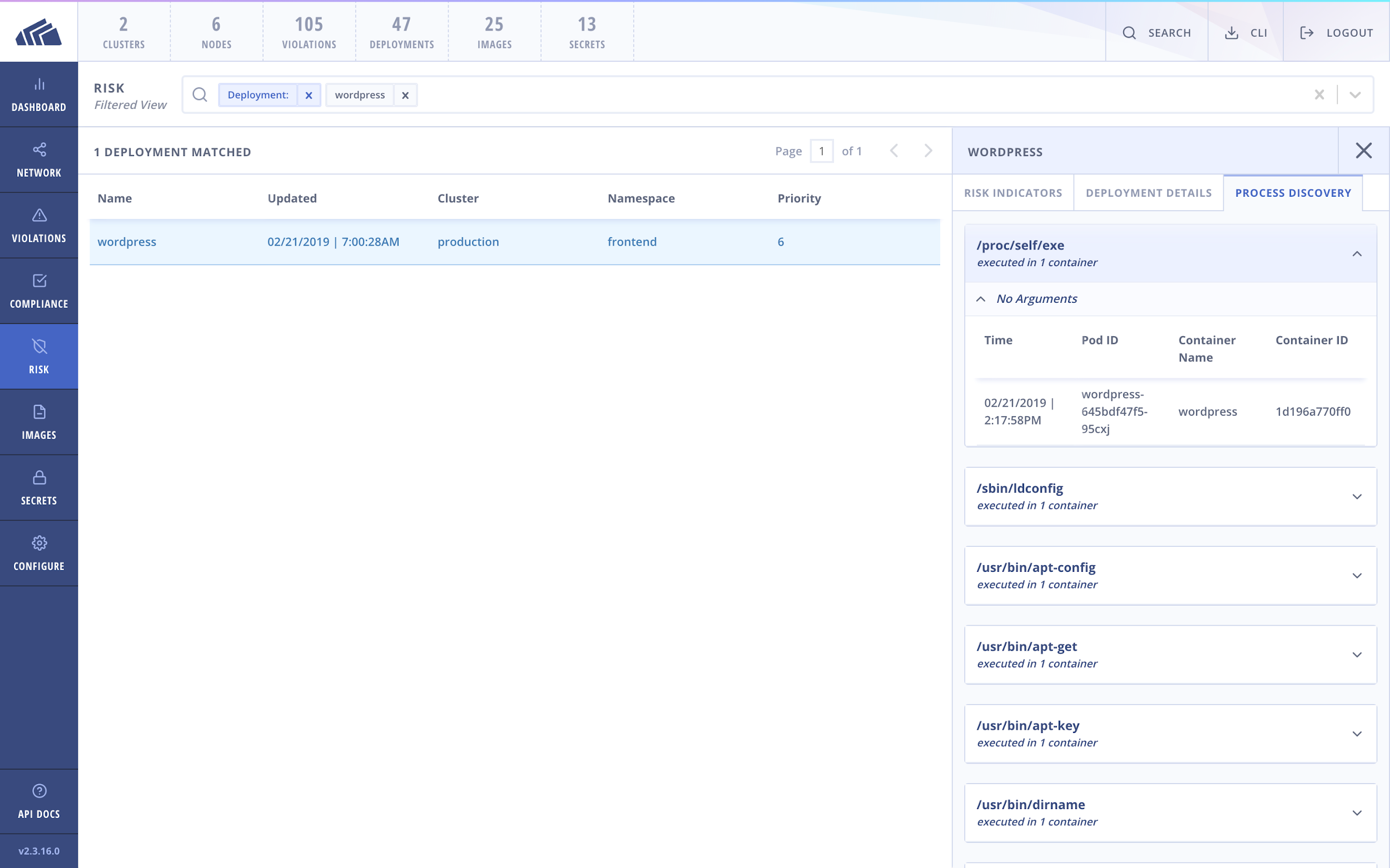 The runC vulnerability provides a potent path for attack, but you have several means of protecting your container environments. Upgrade to the latest version of runC with security platforms that automatically detect and prevent attempted exploitation of this vulnerability.